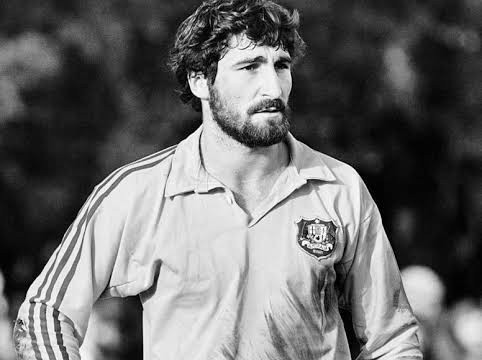 The Doncaster FC extends a warm welcome to Shark Park to former rugby union star, and Wallaby great, Peter Grigg who is our Guest Speaker at our 1st Coterie Luncheon this Saturday.

Peter Grigg’s illustrious international rugby career began in the late 1970’s for some 8 years until he retired after the inaugural 1987 Rugby World Cup.  His career coincided with the first “golden era” of Australian rugby, known commonly as the “Adidas years” (after its first major sponsor).  In this period the Wallabies broke the New Zealand nexus held at the time on the Bledisloe Cup with victories in 1979, 1980 and 1986.  They competed in the 1987 World Cup and also became the only Wallaby team EVER  to win the 4-country grand slam, in their very successful 1984 tour of Great Britain and Ireland.  Peter represented the Wallabies as a fine winger throughout this period, playing in eminent Wallaby teams alongside Australian rugby legends such as Roger Gould, David Campese, Andrew Slack, the Ella brothers, Michael Lynagh, Nick Farr-Jones and Simon Poidevin.

A snapshot of Peter Grigg’s successful Wallaby career is :
–     Born in July 1958 in the Atherton Tablelands region of Northern Queensland.
–     Rose rapidly through Townsville/Qld state rugby to make his Australian Test debut against New Zealand in July 12, 1980 in Sydney.
–     Played a total of 25 Wallaby Tests, scoring 12 tries, from 1980-87 with an 18/7 win/loss record.
–     Was a member of the successful 1984 Grand Slam Wallabies side which toured and convincingly beat England, Ireland, Wales, Scotland, plus a strong “Barbarians” team.
–     Played 8 Bledisloe Cup matches against NZ between 1980-86 twice winning the Cup series.
–     Played 5 Tests in the inaugural 1987 IRB Rugby World Cup in Aust/NZ, finishing 4th and after which he then retired from international rugby.

Records indicate that Peter owns the unique rugby feat of having scored his first international try with his first ball movement on Test debut.  It’s reported that at the 6-minute mark of his Wallaby Test debut in Sydney on July 12, 1980 he chipped over the top of on-coming Kiwi opposition, regathered and sprinted to score the first try in what was a successful Wallaby defense of the Bledisloe Cup.

We look forward to hearing Peter recount the memories and anecdotes associated with his esteemed rugby and personal career, on Saturday.