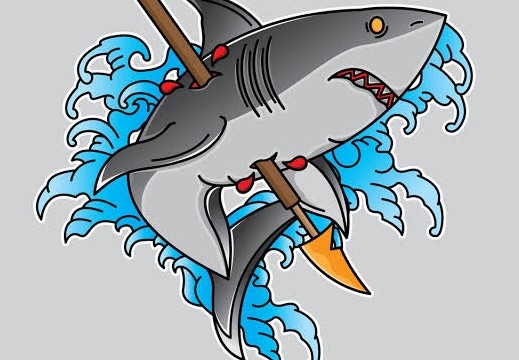 School of Sharks ‘Snookered’ at Schramms!

It was a fairly–dark performance day for the Club last Saturday when both Doncaster teams were convincingly outplayed by visiting club, Vermont.  The Eagles, as reigning premiers and 2019 flag favorites, arrived at Schramms determined to avenge their Round 14 loss to the Sharks last year.  And they did so in spades, winning by 46 pts (Seniors) and 90 pts (Ressies) and delivering a few footy lessons in the process.

In the Seniors we started very competitively troubling Vermont with close-checking football until later in the 2Q when the game was suddenly stopped by a serious injury – multiple rib-fractures – to a Vermont player in a seemingly innocuous incident.  But in one of the imponderables of sport, the lengthy ambulance delay seemed to break OUR own momentum, and the opposition took advantage to kick the next 2 goals and establish a handy 23pt lead at half-time.

Thereafter Vermont took full control of the game and we really struggled to match them in some of the  basics required for top level footy – including quality of ball-use.  Most uncharacteristically, our footy turnovers almost rivalled those of the apple variety in ‘Bakers Delight’!  Encouragingly however, we did lift late in the game to reduce the damage to a 7 goal loss but in the Coach’s own words, a case of “too-little-too-late!”

It was a disappointing 2H performance from the Sharks and has raised the question:  Did we play below our capabilities or were our prior expectations too bullish?  Looking forward to the answers on Saturday-week when we take on a “hot” Rowville side who so far has demolished both North Ringwood (100 pts) and South Croydon (63 pts)!  Perhaps in the meantime some tough competitive work on the training track may help hone our skills under pressure.

There were few Shark 4-quarter efforts last Saturday but two of our dynamos did standout.  For the second successive week “Fogs” and the “Rubber-Man” (Tyson H) have stood-up superbly with their invaluable, strong, no-nonsense footy.  They regularly set the standard for our younger players such as “Kenty” and “Kappa” who played their own roles well in promising games for the Club.  And a special recognition also for Mugga’s consistency and Munksy’s determined work in attack – except for that 20m set-shot ‘shocker’ that even his great grannie probably would have slotted!  Enough said.

In the Ressies, Shealesy’s boys again battled on against the odds.  For three quarters they played some good footy holding the reigning premiers to only 8 goals in ideal conditions.  But in the fourth the dam wall broke and the winning margin doubled.  In the end we had no answers to a classy, talented and well-drilled opposition team that’s been built upon the considerable hard-work and resources invested by Vermont in its young-player pathway.

Best for Doncaster were Zach “T-P”, Willo and Silipo, Millsy and our two Christians – Thiely and Moritz.  Keep working hard, guys, because judging by the Ressies ladder some Shark wins are not too far off!

Off the field, it was pleasing to again see the sizable attendance of Sharks supporters for our first home game.  Your support is valued and we welcome your involvement in any or all of these coming events:
–     Next Sharks game on Saturday, April 27 (at home)
–     Thursday club nights – Happy Hour, Chef Goo’s Kitchen meals, Team selection etc
–     Club  Membership via Luke “Dogga” Curtis on 0404 873 940 or the website
–     Sportsman’s Lunch on Friday July 12 with Guest Speaker, Campbell Brown

GO SHARKERS!!!  Looking forward to some “chocolates”  –  but after Easter!