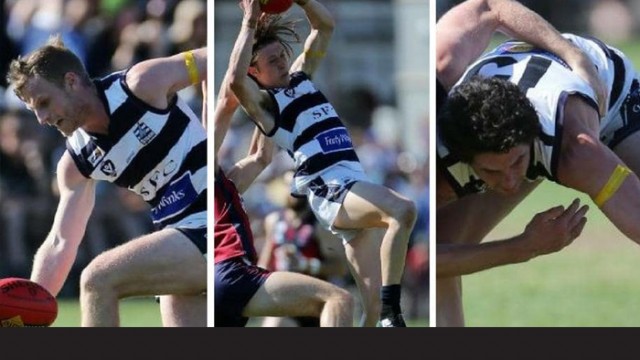 THE goldfields of Bendigo have provided Doncaster with some recruiting nuggets as the Sharks eye a historic Division 1 finals win in 2018.

The pair both played in the Storm’s grand final victory over Eaglehawk in 2017, while Tom Bartholomew, who played in Strathfieldsaye’s 2014 and 2015 premierships, has also put pen to paper at Schramms Reserve.

“A few of these boys we started talking to a few years ago and they were into what we were all about and this year it has all accumulated that one knows another and one led to another,” Doncaster coach Andrew Tranquilli said.

Hartwig was named at full back in the 2012 All Australian team from the country football championships and was considered among the best defenders in regional Victoria.

Conway, who won the Bendigo league’s Rising Star award in 2015, will remain on Richmond’s VFL list with the aim of playing in the state league.

Conway and Hall, who both won multiple premierships at Strathfieldsaye, combined for 37 goals last year as the Storm powered to their third Bendigo league premiership in four years.

“They’re both mid-forward types and we’re expecting some good marking presence out of them as well as ground running power,” Tranquilli said.

The Sharks are aiming to record their maiden top-tier finals victory in club history in 2018 after consecutive elimination final losses in the past two seasons.