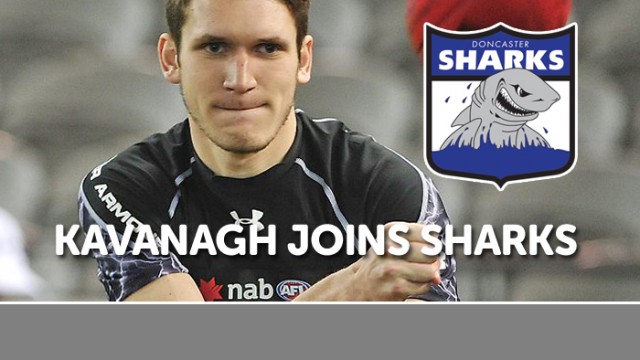 Kavanagh, who finished runner-up in Central Districts’ best and fairest in the SANFL in 2016, signed at Schramms Reserve last week.

Doncaster coach Andrew Tranquilli said Kavanagh was looking at returning to Victoria after just one year in South Australia.

“He really didn’t enjoy life over there so we had a chat and told him what our future and vision was and he brought into it,” Tranquilli said.

“His family is based here and he just wanted to come home so we had a chat and hopefully we can create a good environment for him, which I’m sure we can.

“We’re hoping he’s going to be a good five-year player with us.”

Ben Perry competes in the ruck against Willamstown’s Sean Tighe in 2015.
The Sharks have also picked up former Northern Knights captain Jake Kalanj to add further depth to their midfield and prowess up forward.

The 21-year-old has spent the past three years with VFL clubs Box Hill and Coburg, predominately in the development league.

Warrandyte premiership player Chris Tout and versatile Maribyrnong Park ruckman Ben Perry, who has just returned to the country after working in Canada in 2016, are also notable inclusions at the Sharks.

Tout played in the Bloods’ 2015 Division 4 flag as a 17-year-old but had an injury-interrupted 2016 with soft tissue injuries, while Perry managed three VFL games with Richmond in 2015 before going overseas.

Young half-forward Dylan Pascoe will also be hoping to crack into the Sharks’ best 22 after crossing over from Park Orchards.

After playing at or near the maximum points cap last year, Tranquilli tipped the Sharks would field a team just below the cap of 47 in 2017.

“What we didn’t have last year was that flexibility of a one of two-point swing, whereas we should have that this year, which will be a little bit of a breather,” he said.

“We’ve probably still got room to recruit the right players but we won’t go and recruit for the sake of it.”