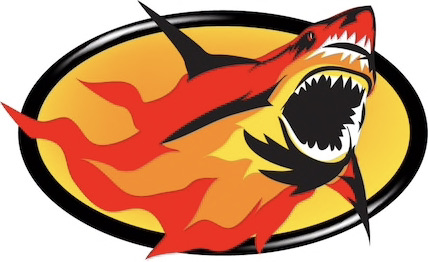 The Blackburn footy club – 2019 runners-up in Premier division – well and truly showed their true colours at Schramms on Saturday with an impressive red-hot display all day which blacked out any hope of either of our Doncaster teams breaking through for a morale-boosting win.

In recent years, the Shark/Burner rivalry has seen a series of close senior results irrespective of venue and ladder positions.  For example, in 2019 there was just a one-kick margin between the teams on both occasions despite a wide variance on the premiership ladder.  But any thought of this continuing last weekend was quickly evaporated when the Burners turned up the heat to high setting and comprehensively outplayed both of our Doncaster teams by 60 pts (seniors) and by 251 pts (reserves) respectively.

Saturday’s losing margins were excessive and most “Shark unlike”.  They do not generally reflect the relative playing strengths of the two clubs as outlined below, although it would be foolhardy to claim that our footballing stocks are presently capable of reaching the same lofty premiership sights of Blackburn or Vermont!

Our Blackburn rivals have built a very strong playing group with good player numbers, football talent and experience through 2 senior and 2 under-19 teams. They are well endowed with mature, fit young footballers in relatively settled senior sides, who have largely come through the ranks playing together for several seasons.  It’s a credit to good club management and footballer development over recent years, enabling Blackburn to reduce the playing gap to Vermont – the league’s powerhouse benchmark club.

In contrast, our own Club has been unable to field an under-19 side (despite considerable trying to date) and we presently have two unsettled senior teams undergoing a major redevelopment phase. Efforts to achieve this have been made more difficult because of a high intake of players from sources outside the club rather than “homegrown” from within.

The success of this development is also currently seriously compromised because of the absence of 6-7 senior Firsts players due to injury, work or personal reasons.  Until this is rectified over coming months a large number of talented but young, inexperienced players are being asked to “sink or swim” in the cauldron of Premier division seniors.  And for any coaching regime, both team development and success will take longer to happen when there are many younger players needing to learn and become integrated into a new playing level and style – echoes of Hawthorn’s Alistair Clarkson on the weekend!

Last weekend in the Seniors, the Sharks played some healthy positive footy in the 1H to ’hang-in there’ on the scoreboard against a quality opposition.  As the two quarters progressed, Blackburn began to look ominously more polished in their ball movement, playing structures etc.  However, the Sharks’ pressure on-ball and around-the-ground remained tight in this period apart from a few outside lapses at stoppages.  Jack “The Maan” again led the way forward with very good support from newcomers, Hayden Bertoli-Simmonds, Hendo, Zal etc.  And with solid defending from our experienced ‘Rambo’, ‘Komes’ and veteran ‘Schimma’ we were able to contain the opposition, score two late goals and go to the main break only 13 pts down (BL 7.3 v 5.2).

The 2H of the game was simply a very different and disappointing story.  As our rivals stepped up a gear or two in most facets of the game, we failed to match them.  Our work-rate declined significantly, particularly off the ball, and the Sharks were just outnumbered, out-hustled and out played at ground level for much of the half.  Blackburn’s resultant control of the footy and their precise ball movement within a good team structure allowed them to dominate on the scoreboard in the 2H.  They added 8 majors and sadly kept us goalless!  We battled on in vain but the simple message was that “we were outworked and were our own worst enemy”!  Perhaps we should change the half-time jelly beans to Mexican jumping beans!!  Enough said!

In the Ressies the Sharks, having mustered the numbers, were simply overwhelmed and outclassed from go to woe by a strong, well-drilled Blackburn seconds team which as some on-lookers later speculated looked to be good enough to compete in EFL First Division seniors!

However, our admiration goes to Macca’s boys and his best players who stuck at it and battled the avalanche facing them.  Hopefully, your footy life will get easier in the coming weeks/months as missing senior players such as Annakis, Fogarty, Ryan, Mugga, Colombo, Stewart and maybe Kalanj work their way back into the firsts.  So hang in there, team!

NEXT GAME:   We take on ‘Mt Everest’ (Vermont) away – it doesn’t get any easier at the moment!

SOCIAL:   Please take out a Club membership or buy some Merchandise to support your Sharks Club. Details are on the website or see mighty Mick Gillin (0429 854 001).