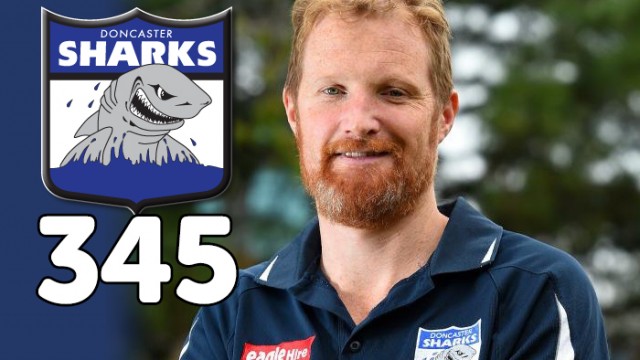 All supporters of Doncaster FC heartily congratulate our legendary Shark ruckman, Greg Jarvis, who yesterday played his 345th footy match for the Club and in doing so has set a new Club record for the most games ever played by a footballer for DFC.

‘Jarvo’, now 37, is in the twilight of an illustrious football career at Doncaster but he currently still manages to train and play most weeks for the Club in his 20th season.  Greg plans on seeing out the 2019 season and then taking time over summer to make a final decision on his playing future.

Greg Jarvis, the footballer, has achieved a distinguished senior football career spanning two decades with Doncaster in the Eastern Football League (EFL).  For most of his career he has played as a skillful 194cm ruckman in Doncaster’s firsts in which he overcame a lack of height against taller ruck opponents by using clever body-positioning, precise palming skills and an uncanny ability to read the play and pack-mark around the ground.  Although not a long kick of the footy, his accuracy – particularly in front of goal – was rarely questioned.

‘Jarvo’ came to Doncaster as an Under-18 player from local Beverley Hills Junior FC and he made his senior debut in round 12 of that year, 2000.  He played 5 senior games in his debut season before going on to forge one of the finest Shark careers the Club has seen.  In June 2017 he became the 9th Club player to reach the eminent 300-game milestone and in December that year he was formally inducted as a 300-game Player Life-Member of the EFL.

Greg slotted seamlessly into the Doncaster senior line-up right from the start and proceeded to win the first of his five Club B&F awards in just his second year of senior footy (2001).  He then followed this up with further Club Best and Fairests in 2002 and a hat-trick in 2006, 2007 and 2008.

Team success did not come to ‘Jarvo’ or the Club for over a decade until finally a 15-year premiership drought was broken in the era of successful Doncaster coach, Andrew Tranquilli.  Greg became an integral member of the Doncaster 2011, 2013 and 2015 Senior EFL premiership sides.  He played along-side many very talented Doncaster players including present-day Shark B&F champions, Chris Annakis and Matt Schimmelbusch, as well as with former elite AFL stars Nathan Thompson, Heath Scotland and Ben Johnson.

This trio of premiership wins saw the Club climb its way from EFL Division 3 to Division 1 (now the ‘Premier’ Division) in which we currently compete.  During this time Greg established himself as a premier big-man of the competition and he should be very proud of the important onfield role he played in the Club’s success in this era.

‘Jarvo’ continued his senior career over the 2016 and 2017 seasons in which Doncaster competed in the EFL’s top division and, for the first time in the Club’s history, also played division 1 finals.  In doing so Greg finally achieved one of his longest held personal footy goals.  Since then, with father-time starting to catch-up on him, ‘Jarvo’ has continued to play Club footy, providing our Reserves team with valuable playing and learning experience.

Greg Jarvis, the person, is a “rock” and a consummate loyal club man at Doncaster.  A humble and quietly-spoken man, his words of advice and wit are generally few but profound.  This trait led many years ago to one of his first coaches, Peter Schneider, nicknaming him “Humphrey” after loveable Humphrey B. Bear who rarely speaks.  (Greg is now quite happy to pass this pseudonym on to the Club’s newest, quiet big-man – Simon “Humphrey” Harris!)

Personally, Greg Jarvis lives with his partner Grace, they having recently established a home in the northern suburb of Pascoe Vale.  And in any profile of him it would be remiss not to recognize his proud parents, Dennis and late Mum Anne, who have been ardent supporters of Greg, his footy and the Club.

Professionally, Greg Jarvis is a CA who is building a career with Barassi & Co., Chartered Accountants – a long-established East Melbourne accounting firm and valued sponsor of Doncaster FC.  We have no doubt that, as in football, Greg’s reliable, no-fuss, hard-working approach will lead to success in this field as well.

In establishing a new DFC playing record, we’re delighted to offer ‘Jarvo’ our huge congratulations on his achieving yet another new pinnacle in his stellar footy career.  It’s been our great privilege to enjoy from both sides of the boundary fence all the magnificent years of memorable footy played by a true champion footballer and clubman of Doncaster FC.