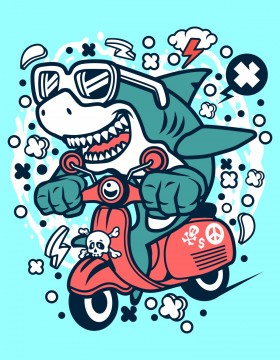 Sharks on the Move with Near-Miss at Rowville

Bouncing back after the slippery slopes of Vermont, our Doncaster Sharks put in a much improved away-performance against Rowville in Round 12, taking the game right up to the 3rd-placed Hawks before losing the match late in the 4Q by 14pts.

Despite the disappointment of the loss, there was much to like about the Sharks’ game last Saturday which augurs well for our important home clash against Montrose this week.  At Rowville, the final margin was a lot closer than our Round 3 drubbing by the Hawks (by 54pts) at Schramms.  And the improvement this time on the scoreboard reflected us playing a better standard of Shark footy – maintaining competitiveness longer, improved footy skills and movement, keeping better game structure etc  – and all in spite of the present decimation of our playing stocks!

The ‘greener’ pastures of Rowville have not been overly kind to the Sharks in recent years, often falling short of a win due to one quarter, or less, of lapsed footy.  This year’s game began in typically competitive fashion with little between the two teams in the first half.  At half-time Rowville led by 5 pts but had there been a few more “footy smarts” around our goals, particularly in 1Q, this lead could easily have been reversed.

The open, ‘hands-off’, switching style of football played in this match continued in the 3Q with both teams’ on-ballers providing good clean ball-movement from stoppages.  However, later in the quarter Rowville managed to achieve forward movement with more efficiency and, with an aerial ascendancy in attack they went on to increase their lead to 4 goals at the final break.  In the 4Q some bold positional changes and a coaching plea “to really take the game on” saw the Sharks fight back well with 5 goals to close the gap to a goal.  The game then tightened up but as often happens the late “fright” to the home team spurred them on to finally get over the finish line in a close, entertaining encounter.

Yes, we lost and, yes, we can always get better, but all credit to the Sharkers for a pretty encouraging performance after the shock of Vermont.  And it must have been a “baby-boomer” Shark who later left the ground quietly singing that 1960’s tune: “Like a rubber ball, we come bouncing back to …..”!  Bring on Montrose!

Best for the Sharks:  there were many in a good team performance, but yet again we benefitted from a huge stand-out game from the ‘Busy Bee’ Sam Caruso (Rumoured to soon play in gloves because of ‘leather’ poisoning!).  And keeping him honest in the B&F race was ‘The Fixer’ Fogs who we hear attacks his breakfast like he plays his footy – a ‘serial’ cruncher!  Also among the best were two of the most promising ‘livewire’ forwards in the Club for a long time – Chris ‘Cool Cat’ Columbo and Kyle ‘The Rev’ Viccars – who performed exceptionally well with 4 ‘big ones’ each.  ‘Turbo Toes’ Ryan was again terrific on the outer wing.  And not to forget the quintessential ‘Rubber Man’, Tyson H, who just keeps rebounding anywhere and everywhere (defence or forward) with the footy, and never ceasing to create opposition havoc!  Great stuff, guys!

In the Ressies, our Club ‘Magician’ Shealesy, again conjured up a skeleton Shark team to put on the park but, alas, he couldn’t repeat the trick on the scoreboard as the boys went down in a ‘nearly close’ one!  Best of the Sharks were two Club ‘immortals’ Jarvo and Shealesy (“we’re not dead yet!”) and four newcomers Anthony Ioan, Luke Christey, Lachy Ross and Mark Coulston.  Well done boys, it can’t be easy at the moment but just hang in there!

And for those wanting feedback on last Sunday’s Special Raffle function – a roaring success, especially for Annakis/Curtis who you can now contact directly with your Funds Loan Application!!  But pity about that throne-sitting Sharker who fell over and ended up in hospital – all without a drink!  (He’s fine)

GO SHARKERS!!! … See ya at Shark Park for the big one!