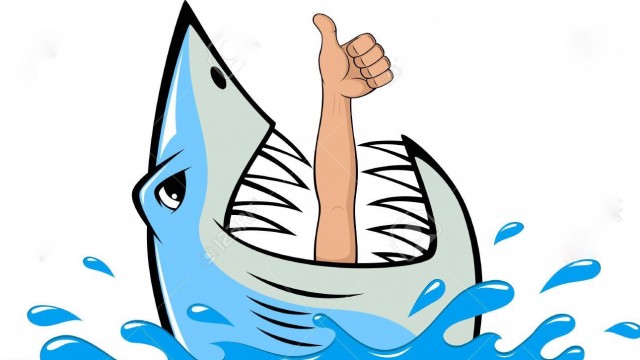 There were plenty of “thumbs-up” and “you bloody bewdies” echoing around Schramm’s at the final siren last Saturday when the mighty Sharks gallantly held off a determined Norwood side to win by the barest of margins.  Hearty congrats go to Stewie and the team on this confidence-building win, achieved in what was a real ‘thriller-diller’ of a game.

And in winning we have broken a 4-game losing streak and placed some distance – 2 wins plus 19 percentage pts – between us and the bottom team (win-less Montrose) at the half-way mark of the season.  While not out of the basement yet, there are positive signs that we can achieve some ladder success in the second half of 2019 – hopefully starting this week against Noble at home!

Saturday’s victory in the Seniors was a real heart-stopper with little between the two teams all day.  The narrow win has kept alive our winning streak over the Norsemen – it is now 6 wins and an overall record of 22 wins to 4 by Norwood.  However this time round, we certainly did it the hard way – coming from behind in the 4Q, holding on desperately against late, hot opposition-pressure, and all despite rotation restrictions brought on by the injured players on the bench!

The match result (against the odds) is an early testament to the hard work being put in by all – coaches / players / medical – to help lift team success in the face of our unprecedented injury run.   It also reflected well on the players’ growing ability to “dig extra deep” when the going got tough.  And tough it was, all day, with Norwood keeping up the pressure across the ground.  As the match ascendancy ebbed and flowed between the teams over the course of the game including those hectic final few minutes, it was a credit to the Sharks’ character that we found the will and desperation to wrest back the initiative from Norwood on several occasions.

So well done, guys – the footy wasn’t often clinical or systematic, but it WAS a good, tight, pressurized brand of blue-collar action all day.  And with that fighting fourth quarter effort we did indeed earn this victory against a club still looking to play finals!

Best of the Sharkers:  Many players pulled their weight on the day in an even team contribution.  But it was surely a delight to see a Club newcomer in only his second senior game stand-out like a beacon – Callum ‘VB’ Stewart.  In Simon Harris’s absence,  ‘VB’ took on the key rucking role with aplomb to nullify bigger opponents and feed our onballers in an impressive and surprisingly mature performance.  And taking good advantage of his work were several mids:  Sam ‘Busy Bee’ Caruso, Jack ‘The Man’ Mahon and Mick Fogs, all of whom continued their good form in the engine room!

In our backline, which has generally done well this season, two of our regulars again were instrumental in the win – Tyson H who “bounced off de-fence” to restrict the EFL’s leading goal-kicker to just 3, and ‘Mr Reliable’, Molly, who blankets his opposition closer than the proverbial ‘emission’ in a spacesuit!

The footy was great, but on a sadder note, we do offer our condolences to Chris Columbo and his family on the recent loss of his grand-father.  RIP.

In the Ressies, Shealesy’s boys again struggled for numbers in the face of the Club’s injury woes and this was ultimately reflected on the scoreboard in a 58 pt loss to Norwood.  But on the positive side, the team did play competitive footy for three of the quarters and it was only a poor 3Q which saw the Norsemen get on top to outscore us by 42 pts and set up a winning lead.  Hang-in there, guys.

Best of the Sharks:  It was very pleasing to see Blair Whelan get back on the park for the first time after persistent leg issues, and to play well.  Regulars Zach T-P and Nick Kent continue to knock on the door with good Ressie performances.  And where would the team be without the consistency of Christian M’s and Tommy D’s footy each week?  Also, a ‘well-done’ goes to Jared ‘JJ’ Jordan in his first game for the Sharks this year.

For Social Information – please see the previous news item for details.  But just in case, here’s a reminder for all our hot-blooded males and those of us who have cooled down to simply become ‘old soaks’ (… memories, all alone in the moonlight …) !
Check out the girlie-action :
–     This Saturday, June 22
–     After our home match against Noble Park
–     At the Club’s Bar
–     Join all the lovely Ladies to “help them “continue on from their Ladies Luncheon celebrations and to start our own. All welcome!

GO SHARKERS !! … looking forward to all the Saturday action (on and off the field).