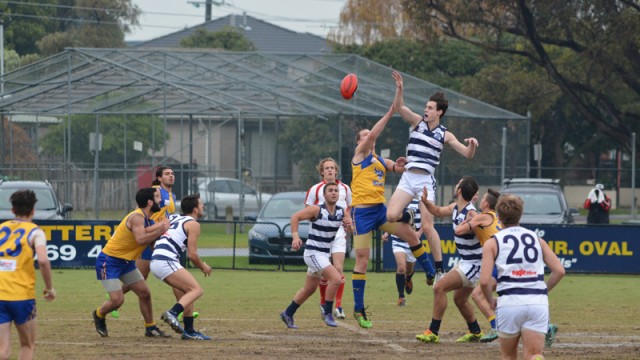 Opening the 2019 season with a trip to the Bull-Ring last Saturday, our senior Sharks lowered their colours to Noble Park by the small margin of 10pts.

In a close, entertaining encounter all day Doncaster played some good footy but just couldn’t manage to bridge the opposition gap late in the game.

Perhaps this year the “footy karma” has stepped in, for the previous 3 years we had won 3 close games at the Bull-Ring by a very similar margin!   However, irrespective of the result Saturday’s game provided some very positive signs for the Sharks in 2019:

–     For many supporters it was a pleasure to see a more open, but still accountable, Doncaster game-style – being prepared to utilize the full ground to “stretch” the opposition and take advantage of the new EFL positional rules. Perfecting this style, including transition of the footy into the forward line, will help our ability to use our skills and pace to achieve success this season.

–     Several new recruits to Shark Park impressed in their first senior game indicating they will be valuable team additions this year. Chris “Big Cat” Columbo and Luke “Live-wire” Viccars were elusive in attack, troubling their opponents and kicking 5 goals between them. And the  big ”Handyman”, Simon Harris, who stepped up from Divvy 3 with added responsibility in Macca’s absence, rucked manfully for most of the day in a very serviceable performance.
Well done, boys, and now the challenge is to keep this standard as the minimum.

–     Our trusty Shark defense proved yet again that it has lost nothing in ability and execution. Again led well by Vanders, Shimma and Tyson “Rubber-man” Hartwig, the signs of another lean year for opposition forwards are looking ominous.  (But it won’t be easy for defenders in general from now on, as they become even more reliant on midfield domination under the new 6-6-6 rule.)

–     And let’s not overlook the “Colonel’s” contribution! Jake Kolanj has shot out of the blocks with a bag of 4 showing that, given some space and good delivery, he can really hit the opposition where it hurts the most!

In all, the Shark’s first-up senior performance was very encouraging and credible but we can’t help feeling disappointed that the opportunity to “steal the chocolates” had slipped through the fingers!  Round 10 should be pay-back time but in the meantime, this week, we host reigning premiers, Vermont.  Well, we did successfully climb Mt Everest on July 21 last year, so why not do it again?  The mid-field battle will again be crucial!

In the Ressies, the Sharks battled on without our playing depth and in the face of an unexpectedly long club injury list.  Noble Park, however, were too strong running out easy winners by 83 pts.  Best of the Sharkers were Kent, Cheesy, Millsy, Delany, Willo and Tiernan-Perversi.  So hang in there, guys, the wheel was designed to turn and the season is young!!

Off the field, its again that time of the year where we ask all our hard-working club members, volunteers and supporters – and our generous sponsors – to dig deep, please, with your marvelous help and support.  It’s always appreciated and without you there would be NO DFC ….. unthinkable!!

Some important Social Event Dates are soon to be announced.  Included is our Sportsman’s Lunch on Friday July 12 with guest speaker, Campbell Brown – should be a ripper!!!