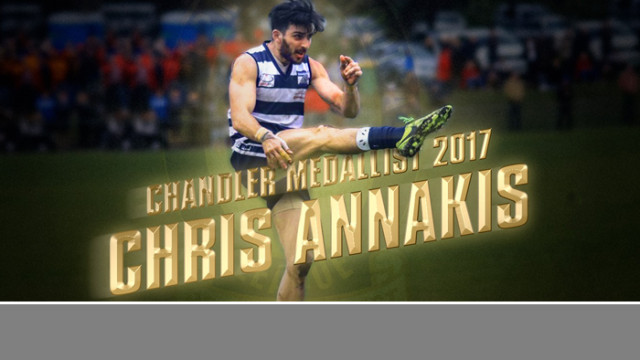 Annakis’ Chandler Medal win comes two years after the gun midfielder won the Kenneth Wright Medal as the Division 2 best-and-fairest in 2015 when Doncaster won promotion to the league’s top flight.

He becomes the fifth player to take home the best-and-fairest award in the competition’s top two divisions.

Blackburn’s Scott Chamberlain was the last to achieve the feat in 1990 when he won the Kenneth Wright Medal, two years after he was crowned the Division 1 best-and-fairest.

Chris Annakis with his Chandler Medal.

“Looking back on it, it wasn’t a bad season.”

Annakis, who was named in Doncaster’s best players in 10 games, said managing his body was one of the keys to his season.

He also becomes the fourth Doncaster player and first since Bill Gehling in 1975 to take home the Chandler Medal.

“As I am getting older you rank them (seasons) a bit different, as you get older you get smarter but you can’t run as fast and you can’t change direction as fast whereas early years you could. 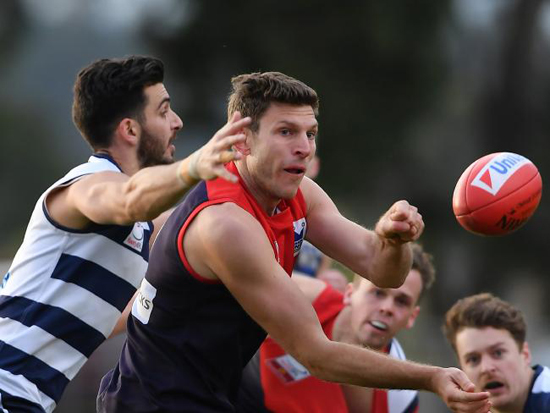 “As long as you keep doing what you can do well, that’s what I assess myself (on).”

Annakis played his junior football with Doncaster East before transferring to Doncaster to play under-18s, proving to be a key cog in the Sharks’ rise from Division 3 in 2013 to the top-tier in the space of three years.

“It has happened pretty quickly but there has been a core group of us from Doncaster that have really been behind it,” he said.

“We’re a bunch of good mates, too, off the field … the sky is the limit for us and we’re going to achieve whatever we can in the next few years.”