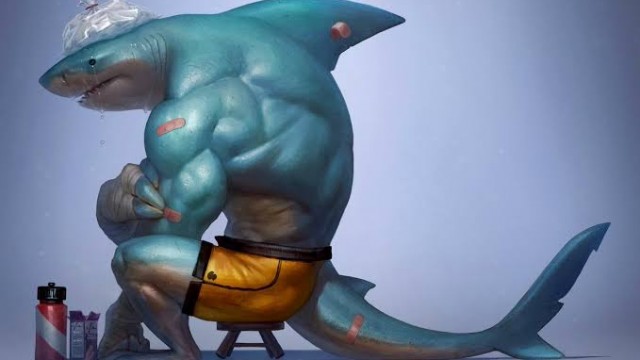 It was like watching an old-time drama movie backwards at “Cinema Schramms” last Saturday when the Doncaster Sharks, having led handsomely throughout the match, got over-run by North Ringwood in the last minutes of the game to lose by 5 pts!

And the movie had to be the 1965 Hollywood blockbuster “The Agony and the Ecstasy” which depicted the turbulent efforts of sculptor Michelangelo’s self-imposed failure, and then ultimate great success, in painting the Sistine Chapel ceiling early in the 16th century.

But in a modern-day reversal it was our senior Doncaster team who unleashed a superb 8-goal burst of classical open football to set up a 44 point lead at quarter time, only to allow the Saints to whittle it down over the next two quarters and then “put us to the sword” in the 4Q, outscoring the Sharks by 7 goals to 2 to finally snatch a last-moment victory.

And to continue the cinematic analogy, the 1965 film was shot in a new ‘Todd-AO’ form – a super 70mm widescreen film/sound format which went on to dominate cinemascope for many years after.  But fast forward to Schramms and it was Supershark Todd-VH who brilliantly lit up our forward line to kick SIX majors in the 1Q and a stellar 8 for the game!  Alas, Vanders’ great individual performance couldn’t provide the team reward that the boys really wanted.

The hugely disappointing loss for all at Shark Park has put the Club back in the pack (8th) in the lower part of the Premier Division ladder – one game ahead of Rowville and Donnie East.  Hopefully, a bye next week will be followed by the return of multiple senior players from injury in time for our next huge challenge at home against Noble Park.

Saturday’s main game started with plenty of ‘bang’ from the Shark’s midfield who, led by Jake, Jack and Hayden’s dominance, regularly and cleanly drove us forward.  And man-of-the-moment Toddy was there to take full advantage of it in ‘Tony Modra’ style (or should that be Paul Vander Haar style?) to have the opposition ‘shell-shocked’ at the first break (Donc 8-3 v NR 1-1).

In the 2Q the Saints noticeably tightened up their on-ball work and started the long road back by outscoring the Sharks by 11 pts (10 scoring shots to 4).  Goals to Vanders, Jack and Valks enabled the team to maintain a healthy 33 pt margin at half-time.

After the main break North Ringwood continued to lift around the stoppages and centre bounces and limit our delivery forward.  In sharp contrast to our goal deluge in the first quarter, we managed only two Shark majors from opportunist snaps by ‘Cool-cat’ Colombo and ‘the Fizz’ in 3Q.  The Saints outscored us in this period and we missed an early opportunity to “put the game away” beyond their reach.  (Donc 13-5 v NR 8-10).

The final quarter turned into an un-welcome cliff-hanger as the opposition continued to chip away at the contest and our 25 pt lead.  Kicking the first 4 goals of the quarter with great accuracy the visitors got to within a solitary point.  Looking in trouble, the Sharks responded with good ‘breathing space” majors to the Hayden ‘Hyphen’ and from a super snap by Vanders for his 8th.  But the Saints just kept coming and we struggled to stem their momentum as they increasingly sensed an upset.  Full of running they scored the last three goals of the game with a minute left on the clock and grabbed a remarkable fightback win.  For Doncaster, all that early strong dominance suddenly counted for little – very sadly we had snatched defeat from the Shark jaws of victory!  So, it’s time to move on – quickly, but with added determination.  Yep, footy sure can bite you in the backside!!

The earlier Reserves game was a temporary battle for the wooden spoon but our Sharks team was no match for the Saints because of the Club’s major list of injured Senior players.  The boys battled on over the course of the game but were outscored by some 5 goals in each half of footy.  It was disappointing to not score a win to celebrate Jacko’s 100th game for the club – well done, Luke!

NEXT GAME:  A bye this week, then hosting Noble on 24th July.